Travelling by train through Holland last year Maggie Scott encountered a group of young people running around Rotterdam station dressed up as Zwarte Piet. A young female in full costume, and a big smile, approached Maggie perhaps wanting to offer her a sweet, perhaps collecting for a charity, its not clear as before the young woman could finish her sentence Maggie, filled with rage and anger, glared so fiercely at her she quickly disappeared into the crowd.

‘I surprised myself with the strength of my anger – I found it intolerable that this young woman was completely oblivious to the fact that I might offended by this character.’ Scott had found the latest subject to explore in her artwork that focuses on the impact of internalised racism in today’s European culture, the character of Zwarte Piet (Black Peter).

When St. Nicolas, (Santa Claus), arrives in the Low Countries, he is accompanied by Zwarte Piet, a general servant who distributes sweets to children. The origins of this controversial character are not clear. Since 4AD St Nicolas’ companion has been described variously as a creature, the devil and a servant. It was in Jan Schenkman’s children’s story St. Nicholas and his servant published in the mid 19th century that the servant was characterised as a young black man in a page costume.[1]

Travelling with his master on a boat from Spain in mid November, the arrival of the pair is celebrated with Sinterklaas parades across the region and their escapades are reported on national TV during the Sinterklaas news, a popular program that is broadcast every evening at 6 o’clock. In school children re-enact the festive story in plays and draw pictures of the pair. Shops are filled with Zwarte Piet.

There are a multitude of stories attempting to cleanse the Zwarte Piet of his racist overtones. However, examining Dutch history it is easy to trace the survival of this racist imagery back to the colonial age, and the Golden Age of Holland in the 17th century. 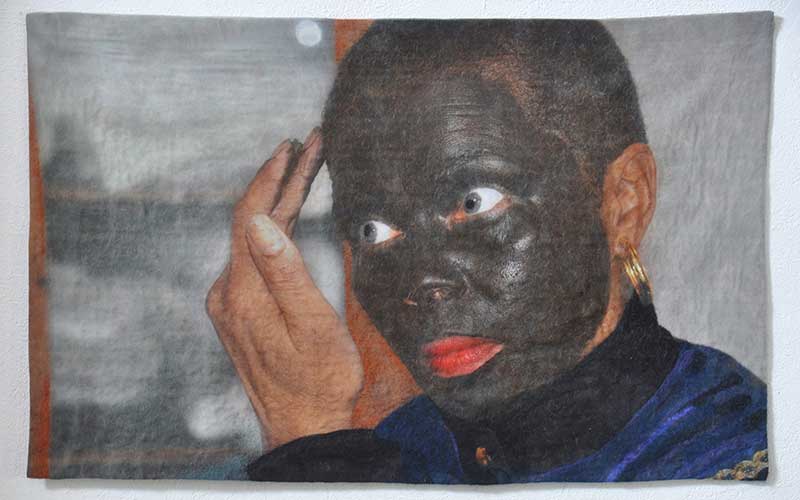 The wealth and reputation gained during this period is of great significance to the Dutch and pride in the achievements of the Golden Age is central to the national identity. One of the chief sources of revenue was the slave trade through the West India Company, Alison Blakely states:

‘Dutch involvement in the trade would remain sufficiently high for them to account for shipment of some half-million Africans to the Americas before it ended.’[2]

During this period Europeans constructed a representation of the ‘Other’ to justify this exploitation. The European and the savage trope propagated by the elites of Western Europe in the time of slavery stated that technology and industrialisation equated to evolution and civilisation.

Europeans couldn’t identify the civilised culture in these foreign countries they went on to colonise, as it bore no resemblance to that at home. Jan Nederveen Pieterse is in no doubt that historically and today ‘the formation of images of non-Europeans is conditioned by internal European concerns.’[3] This allowed white European traders and merchants to paint African people as ‘savages’, promoting colonisation and it’s co-current religious missions. The concept of culture was European in definition, after all.

That the behaviour of black Africans was manipulated to fit a European agenda and maintain the status quo of their societies is evident when in examining how the European characterisation of them changed over time. At first they were reported as savages; a dangerous threat that needed to be dominated and then, following the establishment of the colonies, as obedient primitives content to be under colonial rule.

These stereotypes were spread through images and standardised visual symbols relating to ‘blackness’ were established in Western popular culture. The entirely black face, full red round lips, bright white teeth and eyes and large gold earrings. Dancing minstrels and golliwogs are examples of this representation. And we can see the continuation of this visual language in the present-day image of Zwarte Piet.

Those dressing up as Zwarte Piet paint their faces black; wear red lipstick, Afro wigs, gold hoop earrings and a page costume with hat and neck ruff. His appearance and subservient position to the white Sinterklaas are a clear connotation of slavery.

Similarly characterisation of black people as savage, primitive and jolly and are also evident in the behaviour of Zwarte Piet. Zwarte Piet’s often speak in a simple language, cannot do basic arithmetic and behave in a mischievous or clumsy manner; for example, guiding Sinterklaas in the wrong direction because he can’t read a map. His mistakes are always corrected his the white master Sinterklaas.

The effect of this character on children is the pre-occupation of artist Maggie Scott and she explores the questions of skin colour, masquerade and racism posed by Zwarte Piet in series of prints that record the act of Scott, a black woman and Polly Crichton, a half Dutch white woman, dressing up as the character.

In the first image Crichton dons the costume first. Scott looks over her shoulder at her face, staring into Crichton’s blue eyes. Comparing the two profiles reveals that a white woman dressed up as Zwarte Piet is a grotesque and scary sight. This looks nothing like a black person, despite the make up and Afro wig, but more like a clown imparting a sense of ridicule and threat.

Scott completes painting her face with black paint in the second image. The grey background casts a murky mood, implying the dubious nature of this task. What value is attached to skin colour? Underneath the Zwarte Piet costume Scott is not white like her counterpart.

The third image “Teddy”, confronts the viewer with two Zwarte Piets, whose faces stare icily out of the picture. The print surface alludes to the future. Protruding between the figures, in the foreground of the frame, is the image of a child, an example of the audience that this character is damaging. Young children, at school or visiting the festive Sinterklaas parades, enjoying the excitement of the Christmas holiday, are exposed to a figure that insidiously imparts racial stereotypes.

The fragmented fields conjures a sense of projection, Scott is alluding to the projection of this character and all of its negative connotation onto black people through these visual codes. It is a common experience that black minorities encounter in white majority culture, their identity has been constructed by the racist history of a white culture and projected onto them rather than being formulated by themselves W.E.B Du Bois voiced this feeling in his book The Souls Of Black Folk in which he recounts‘…a peculiar sensation, this double consciousness, this sense of always looking at one’s self through the eyes of others…’[4] 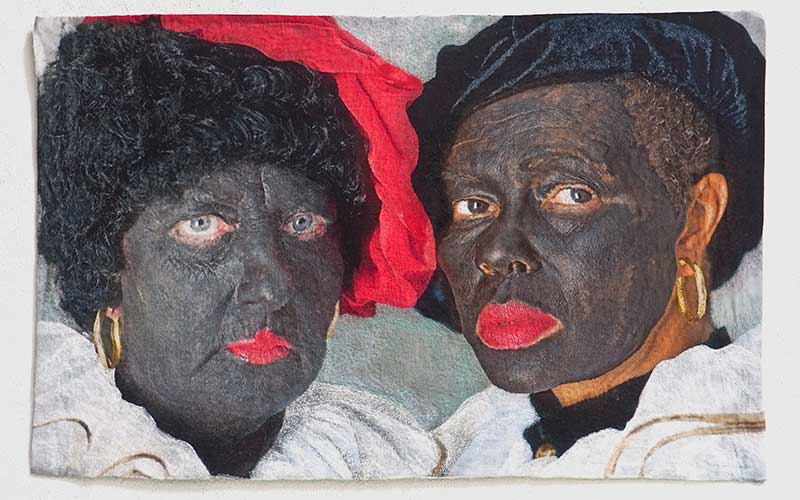 What struck Scott when producing the images was that the act of painting her face black gave her a mask, ‘you can access a different persona and be someone else. Actually Zwarte Piet gives people an opportunity, especially a reserved Dutch Protestant community, to be wild.’ This maybe why the Dutch are unwilling to relinquish the Zwarte Piet character as he offers an opportunity for escapism.

It has been established that the Zwarte Piet character is clearly racist, Brown and Tavares argue ‘what needs to be addressed is not whether this tradition (or elements of it) is racist, but why the majority of Dutch society is denying the truth that it is.’[5]

They posit that by being able to ridicule Black people through this character the supremacy of white people is maintained all camouflaged by the argument it is harmless festive fun. As with many multicultural societies there are no doubt sections of the Dutch community who point at immigration into the Netherlands and overstate the necessity to defend and uphold their traditions.

Additionally, the Zwarte Piet character is a part of every Dutch person’s childhood. He is experienced in a time of innocence, and possibly this memory of innocence is somehow cleansing him for adults when they assess him. Maybe most importantly, the significance of admitting the racist nature of Zwarte Piet maybe too much for an individual, and collectively society, to acknowledge.

Psychologist Leon Festinger states that when faced with a variety of behaviours or beliefs that contradict one another humans adopt cognitive dissonance in order to restore balance in their thoughts and behaviour.

Most Dutch people would have participated in the Sinterklaas parade and festivities since a young age. When they are at an age to see that Zwarte Piet is racist they readjust their perception of what is racist to absolve themselves, their parents, teachers and the wider Dutch culture of the guilt associated with racism.

By acknowledging Zwarte Piet is racist, they would have realise they participated in, however unconsciously, racist behaviour. And face the colonial history of their country, the reality the Dutch Golden Age of the 17th century was facilitated by the exploitation of Black Africans, colonisation and slavery.

Furthermore the black community is minority in the Netherlands and are underrepresented within the power structures of the nation, so their voice is not heard amongst the white majority nor are there people in authority who are willing to call for the banning of Zwarte Piet.

Regardless it is time for the Dutch to be honest and accept Zwarte Piet is racist. Scott says:

‘ It is hard for people to own their racism; they feel that they are a bad person…. Of course you are not a bad person, none of this is our fault we did not come into the world with these ideas. However, the only way to come out of it is first to acknowledge it ……and then clean it up! ’